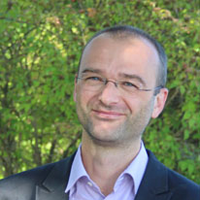 Our group works on encoding and transmission of auditory information in normal and prosthetic hearing.

Towards normal hearing we aim to decipher the molecular and cellular mechanisms of sound coding at the hair cell ribbon synapse and signal transmission at the endbulb of Held synapse in the cochlear nucleus. We are interested in the mechanisms that enable the impressive temporal precision and long-lasting reliability of synaptic transmission in the early auditory pathway. Moreover, we aim to understand how the "dynamic range problem": i.e. perception of sound pressures over six orders of magnitude with encoding over only 1-2 orders of magnitude in each individual neuron is solved by the cochlea. We approach these questions by a systematic analysis of the molecular anatomy and physiology of hair cell ribbon synapses and endbulb synapses in normal and molecularly manipulated hair cells in collaborations with the groups of Andreas Neef, Ellen Reisinger, Nicola Strenzke and Carolin Wichmann and partners outside the Department of Otolaryngology. Confocal and STED microscopy are applied to immunofluorescently labeled hair cells for quantification of protein/structure localization, as well as shape and size of structural elements of the synapse such as the ribbon, scaffolds and channel clusters. This work builds on a long-term collaboration with the Dept. of Nanobiophotonics of Stefan Hell at the MPI for Multidisciplinary Sciences (link). These findings are compared to electron microscopy and tomography studies performed by Carolin Wichman. Functionally we perform patch-clamp measurements of presynaptic currents and membrance capacitance changes (e.g. Moser and Beutner, 2000), the latter reflecting exocytic and endocytic changes in cell surface. Uncaging of caged Ca2+ is used to study the intrinsic Ca2+ dependence of exocytosis (e.g. Beutner et al., 2001). Combining these approaches to synapse function with morphological studies we have gained insights into the molecular physiology of the hair cell Ca2+ current (e.g. Brandt et al., 2003; 2005; Cui et al., 2007; Neef et al., 2009; Meyer et al., 2009; Schrauwen et al., 2012), role of the synaptic ribbon, the scaffold protein Bassoon (Khimich et al., 2005; Buran et al., 2010, Frank et al., 2010) and the multi-C2 domain protein Otoferlin (Roux et al., 2006; Pangršič et al., 2010; Reisinger et al., 2011). We have indicated important differences of hair cell synapses to other synapses regarding their molecular composition (recent reviews in Pangršič et al., 2012, Rutherford and Pangršič, 2012). For example they express Ribeye [Khimich et al., 2005], Otoferlin [Roux et al., 2006] and seem to lack Complexins [Strenzke et al., 2009], Synaptotagmins [Reisinger et al., 2011] and neuronal SNAREs [Nouvian et al., 2011]. Presynaptic patch-clamp is combined with confocal imaging of synaptic Ca2+ signaling and membrane turnover using pHluorins. Imaging enables investigation of single synapses as do patch-clamp recordings of postsynaptic boutons (Pangršič et al., 2010; Rutherford et al., 2012). Imaging of synaptic Ca2+ signals have revealed an intriguing heterogeneity among the synapses of a given inner hair cell (Frank et al., 2009; Meyer et al., 2009). Active zones differ in the strength and voltage-dependence of their Ca2+ influx. The strength appeared to correlate with the size of the synaptic ribbons. We argue that the heterogeneity of presynaptic Ca2+ signaling is a key mechanism contributing to the wide dynamic range of sound coding. We hypothesize that different active zones drive spiral ganglion neurons with diverse spontaneous rates, sound thresholds, and dynamic range. Studies of synaptic transmission at the endbulb of Held synapse involve patch-clamp, modeling and electron and immunofluorescence microscopy.

Approaches towards restoration of hearing by gene replacement and cochlear optogenetics

Our understanding of normal coding and transmission forms the basis for designing strategies for the restoration of hearing in animal models of human deafness. Using viral gene transfer we aim to restore hearing in mouse mutants lacking essential synaptic proteins such as otoferlin. Challenges are the large size of the cDNA, the efficiency of transfection protocols and adjusting appropriate levels of expression. Nowadays, hearing can be partially restored to the deaf by CIs, which bypass the cochlear dysfunction via direct electric stimulation of spiral ganglion neurons (SGNs). CIs enable open speech comprehension in most users, but the quality of hearing is low. This results from low frequency and intensity resolution of coding due to the wide spread of electrical current from each electrode contact.

We aim to overcome this fundamental problem by establishing many independent coding channels via spatially confined optical stimulation of channelrhodopsin (ChR)-expressing SGNs by tens of microscale light emitters along the tonotopic axis of the cochlea (cochlear optogenetics). This innovation promises a dramatic increase in the frequency- and intensity-resolution of CIs and a ground-breaking advance of hearing restoration. Cochlear optogenetics will also be of enormous use in auditory research. We already have proof of principle in rodents: we achieved stable virus-mediated expression of ChR in SGNs and recorded light-evoked auditory activity. In the future we aim to develop cochlear optogenetics in larger animals by:

Together, this work will establish cochlear optogenetics as a research tool, validate its potential for improved hearing restoration and prepare translation into the clinic.