Why hear the light?

According to a report of the WHO, approximately 430 million people – over 5% of the world’s population – suffer from disabling hearing impairment and by 2050 nearly 700 million people are projected to require hearing rehabilitation. When conventional hearing aids can no longer provide relief, auditory signals can be directly converted into neural impulses in the auditory nerve by cochlear implants, bypassing the impaired sound coding inside the cochlea. This "sensory prosthesis", which has already been developed in the 70s of the 20th century, is used by more than 700,000 hearing impaired patients and is considered the most successful neuroprosthesis in the world. It uses a microphone to record sound and converts it in real time into electronic signals, splitting it into several channels coding for different frequency ranges. The information about the sound intensity in each frequency channel is then relayed to the auditory neurons via 12 to 24 electrode contacts placed along the tonotopic axis of the cochlea. Cochlear implants enable open speech comprehension in most users. However, they suffer from poor quality of sound encoding since, due to the large lateral spread of electrical current from each of the electrode contacts, too many auditory neurons surrounding the contact are stimulated at the same time (Fig. 1). Thus, the number of independent channels is very low (typically below 10) and the discrimination of frequency and volume is rather limited when listening with cochlear implants, as compared to normal hearing. This severely limits the ability to understand speech in background noise, to follow musical melodies, or to interpret the emotional tone in speech.

Since light can be much more efficiently focused, this fundamental problem could be solved by using light instead of electrical current to stimulate the neurons. Every light source would then excite a considerably smaller group of cells as compared to "electrical hearing" (Fig. 1). When sound stimuli are electronically split up into discrete frequency bands, future cochlear implants can then transfer this information via up to 100 independent stimulation channels using microscale light sources. This promises a significant improvement in the potential for discrimination of pitch and volume and thus a breakthrough in the restoration of hearing for the severely hearing impaired.

How can neurons hear the light?

Neurons are typically not light sensitive. However, Ernst Bamberg and Georg Nagel of the Max-Planck-Institute of Biophysics, along with Peter Hegemann of the Humboldt University in Berlin, have isolated and characterized a type of light sensitive proteins from green algae which has been tagged "channelrhodopsin". When using e.g. viruses as "gene shuttles" to transfer the genes coding for these proteins into different cells, they can be used as light-controlled "switches" to activate the cells, a procedure that has been termed "optogenetics". Specific viruses, which have been rendered harmless to the targeted organism by molecular modifications, are currently used within clinical studies for the treatment of congenintal blindness. We can use such viruses to introduce the optogenetic "switches" into auditory neurons to render them light sensitive. We have already demonstrated the feasibility and efficiency of cochlear optogenetics in several studies with rodents. With single-channel laser stimulation and multichannel stimulation from optical cochlear implants, we could activate the auditory system even in deaf animals, as we could demonstrate by recording light-evoked auditory brainstem responses. Additionally, we could show that, indeed, a more confined population of auditory neurons is activated when using light instead of electrical current as activating stimulus, that is comparable to the population activated by pure-tone sound stimuli.

Where do we go from here? 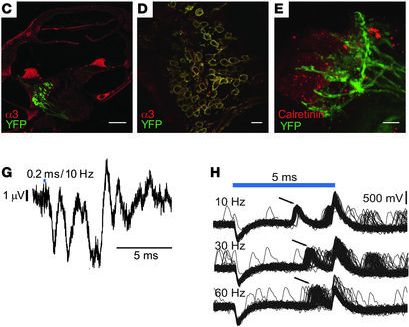 Leibniz-Prize of the German Research Foundation to Prof. Moser
Major German research prize to support the awardee's research, used among others to support the research on auditory optogenetics.
Funding 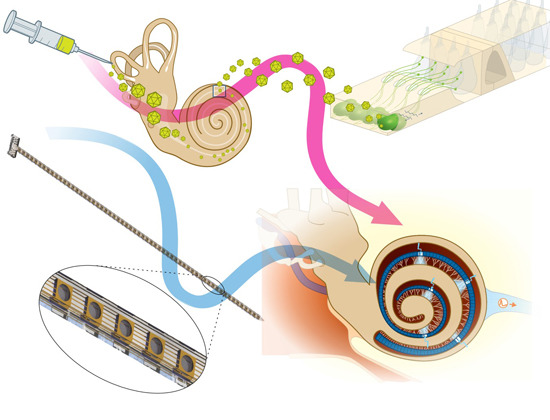 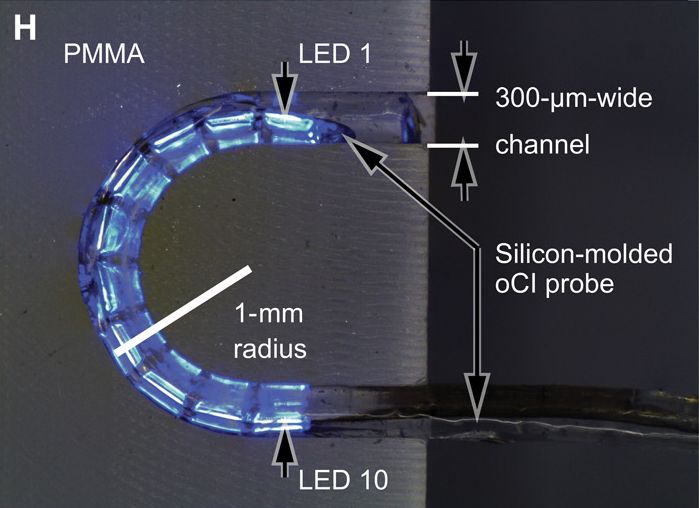 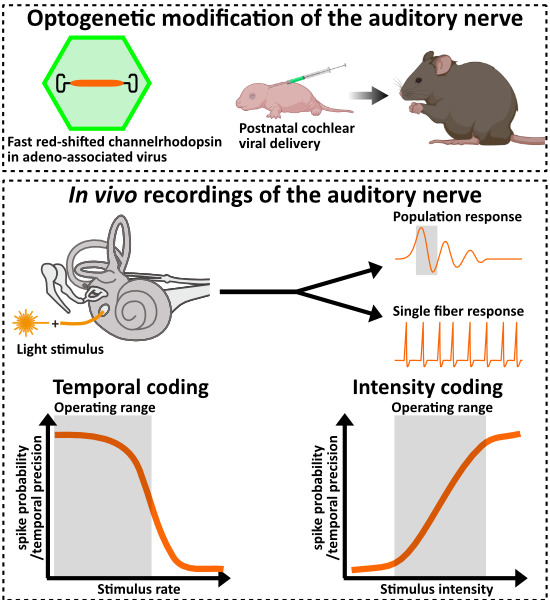 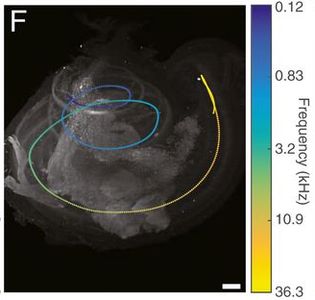 Funding by Volkswagen-Stiftung from the "Niedersächsisches Vorab" (support of negotiations with Prof. Moser)
Funding


This method is now being refined to achieve the final goal of a clinical application (Fig. 2). In cooperation with optogeneticists, we have developed channelrhodopsins that are suitable for use in the inner ear and allow stimulation of neurons as close to physiological conditions as possible using low light intensities. Funded by the European Research Council as the Advanced Grant "OptoHear", the Institute for Auditory Neuroscience in Göttingen has now developed efficient and safe means of gene transfer into animal auditory neurons with the goal of future clinical studies in profoundly deaf patients. Within the BMBF-funded project "Optical_CI" we have developed innovative flexible micro-LED cochlear implants to enable optical stimulation even within the inner ear of small rodents. As an alternative, we are working on implants that make use of miniature light guide fed by red laser diodes. The final goal ist to develop cochlear implants for human use with 100 light sources (Optical cochlear implant demonstrator, Fig. 3). These probes are then hermetically sealed and their insertion, function, and stability are tested in animal trials. In functional studies we measure the temporal-, frequency-, and intensity-resolution of sound coding with optical multi-channel implants and compare this to normal and "electrical" hearing. In collaboration with Göttingen X-ray scientist Tim Salditt and colleagues we analyze the position and orientation of the optical cochlear implants and their light emitters within the cochlea using high resolution X-ray tomography (Fig. 4). Further, we perform microscopic examinations of inner ear and brain tissue to analyze potential damage by the gene shuttles, exogenous proteins, optical stimulation, and insertion of the implants.